A Local Waterfront Revitalization Program (LWRP) is both a policy document, used by the Waterfront Advisory Committee to review projects that occur within the city's Coastal Zone Boundary, and a visioning document, establishing a community's vision for future development within the Coastal Zone. An LWRP is adopted by a local community and approved by New York State Department of State (NYSDOS). Visit New York State Department of State's (NYSDOS) webpage to learn more about the program.

Why Did We Update Poughkeepsie's LWRP 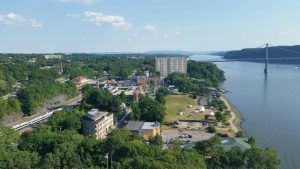 Poughkeepsie had a historic LWRP (PDF), which was adopted by the city in 1999. However, that document was not officially approved by the NYS Department of State. Although the city's LWRP was adopted into local law and therefore does require projects occurring within the Coastal Zone to be consistent with its established policies, because the LWRP was not approved by the NYSDOS, the document did not have jurisdiction over state and federal actions occurring within the city's Coastal Zone.

Poughkeepsie has a beautiful waterfront with valuable assets and many opportunities, but there are also challenges that the LWRP can address:

The City of Poughkeepsie is updating its Local Waterfront Revitalization Program (LWRP) and performing a Build-out Impact Analysis for key redevelopment sites in the City's Waterfront Transit-Oriented Development District. The Updated LWRP will reflect changes that have occurred in the Waterfront Revitalization Area since the City last adopted an LWRP in 1999, incorporate recommendations of recent planning efforts, and address resilience to flooding and sea level rise, principles of sustainable planning and smart growth, and strategies to books economic development for the City.

The Build-out analysis will provide an environmental analysis of land use and zoning, traffic, visual resources (views), community facilities (e.g. police, fire schools, etc.), infrastructure (water and sewer),floodplain and storm water, climate, and other potential impacts of the build-out of the six key redevelopment sites contained in the Waterfront Redevelopment Strategy (PDF). This analysis will become a tool the city can use to assist the development community with site specific approvals of individual redevelopment projects.

The process, which is expected to take about 12 months, began with a kick-off meeting with the LWRP Working Group in early October 2018. We will hold monthly Working Group Meetings, brief the WAC quarterly, and meet with the Common Council at strategic moments throughout the process. A first public workshop will be held on December 5, with a second public workshop and public survey to follow in early 2019. The team proposes to have a draft LWRP by late March 2019 with compliance with the New York State Environmental Quality Review Act (SEQRA) occurring during the spring of 2019. The Build-out Impact Analysis will be prepared simultaneously and each document will inform the other.

Input from members of the community is critical to development a Waterfront Plan that is reflective of the aspirations and priorities of the City. We plan on reaching out to a wide range of stakeholders, including residents, property owners, business owners, City staff, community organizations, and others. The Community Engagement Strategy will include a variety of tools to reach local stakeholders, so members of the community have multiple ways to get involved: